In the words of the late historian Charles Blockson:

“This book {walk} is respectfully dedicated to the memory of those brave souls who represented the morality of antebellum America. They served an admirable purpose of organizing the Underground Railroad – that mysterious, formidable enemy of slavocracy – with an uncompromising commitment to freedom.”  Hippocrene Guide to The Underground Railroad

On Saturday September 11, as the nation mourns the 9/11 terrorist attacks, I will becompleting a 75-mile walk of the Underground Railroad from Baltimore County, Maryland to Christiana, Pennsylvania commemorating the 170th Anniversary of the Christiana Resistance. The walk is dedicated to William Parker, George Hammond, Joshua Hammond, Nelson Ford, and Noah Buley, all Freedom Seekers who successfully fought off a posse of kidnappers who sought to return the men back in to slavery in 1851.

On this anniversary, I will remember the sacrifices and journey these young American men made to be Free, in antebellum America.

Here’s a map of my journey that I travelled to retrace William Parker’s footsteps to Christiana, Pennsylvania. 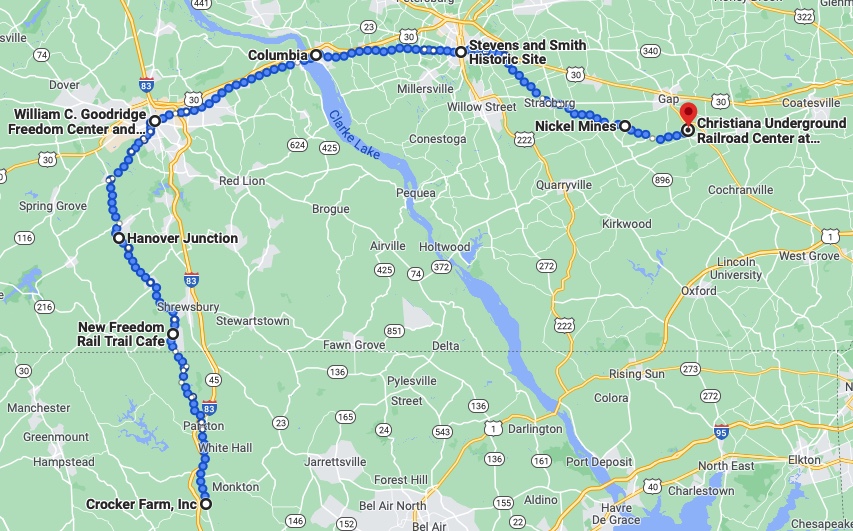 On Saturday April 10, we will begin our Walk to Freedom across Brooklyn from the Owls Head Dog Run Park, 68th and Shore Road. We will begin about 8:15 a.m. For more details on our walk, see Walking Schedule to New York. We decided to start at Owls Head Park because it is roughly adjacent to St. George,  Staten Island, our end point from last weekend. Due to the logistical issues in trying to cross the Hudson River to Brooklyn, we decided to drive instead.

If you have questions about meeting up with us during our walk across Brooklyn and Manhattan, please email: kjohnston16@yahoo.com

This Saturday, April 3, my brother, Keir, and I will make our way across the Arthur Kill River (still no confirmation on a boat ride) to Tottenville, New York. Once there we will follow a path to the North side of the island following a route one group of fugitive slaves are known to have taken. We will start in Tottenville near the river then walk to the Sandy Ground Historical Society on Woodrow Road and finish at the Light House Museum where historian Debbie-Ann Paige will greet us. Click here to go to my Blog Page to learn more.

March 20, 2021 – After walking more then 235-miles from the banks of the Choptank River in Caroline County, Maryland I am excited to announce we expect to reach the historic Perth Amboy Underground Railroad crossing around 1:30 p.m. on Sunday March 21, 2020. We will begin our walk at 8:30 a.m. at the Anshe Ameth Memorial Temple in New Brunswick to Albany St. crossing over the Raritan Ave. bridge following Route 27 (Essex Ave.) through Edison to Perth Amboy via Smith St. Click here to go to my Blog Page to learn more.

January 4, 2020 – Follow Ken as he retraces the footsteps of Harriet Tubman on a 140-plus-mile sectional hike along the Underground Railroad Byway from Poplar Neck to Philadelphia. Click here to go to my Blog page to learn more.

Sin Cita/Without Appointment was a two and half week, 215-mile walking journey across Puerto Rico, September 7 – 20, 2019. It was a symbolic effort to mark the second anniversary of Hurricanes Irma and Maria, by members of four arts and culture organizations.

Our intention was to explore what’s possible when people look inward to revive traditions and cultural practices that support the spiritual and material development of communities. While we achieved some of our goals, unfortunately we didn’t fully meet our objective due to a disagreement that erupted between the hikers and the film crew that abandoned us. Undeterred by the film crews lack of commitment to the project, the hikers pressed on and successfully completed the mountainous journey alone and as scheduled. 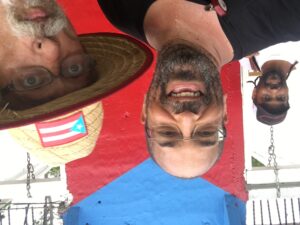 Sometimes not everything goes as planned.

While the walk was not captured in a series of video vignettes as planned and no documentary film was created, the hikers completed amazing interviews with artists, community leaders and others along the route who expressed the change, growth, joy, and adversities that residents on the island continue to experience today.

Before the walk, Ken began collecting messages in a book from people on the street he met in Holyoke, Massachusetts, Philadelphia, and across Puerto Rico.  It was to be presented to the next democratically elected governor of the island but still remains unfinished. It is his hope to complete the journal during his next walk around the island after the pandemic ends and it is safe to return.

All of this was inspired out of the climate there, and we believe little efforts like this can sometimes have big impacts. 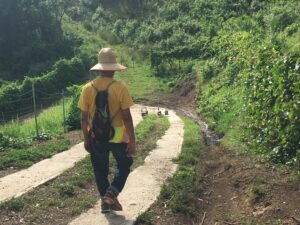 Starting in Isabela, in the northwest corner of the island near where Hurricane Maria rejoined the sea, the group walked a diagonal trajectory across the Cordillera Mountains to the southeast coast where the storm first made landfall in Yabucoa on September 20, 2017.

“As a collective we have been working in the Puerta de Tierra neighborhood of San Juan for the past two years, acknowledging the communities unique working class history through a series of workshops, multimedia reports and public murals. This walk is a continuation of our commitment to engage with communities in Puerto Rico and support their efforts in rebuilding,” said Keir Johnston, co-founder of Amber Art and Design.

In 2017, Hurricanes Irma and Maria devastated vast tracts of land across the archipelago of Puerto Rico, leaving in their wake an unprecedented natural disaster, exacerbated by a man-made disaster – by way of the U.S. government’s willful negligence in providing a timely or adequate response to the crisis. 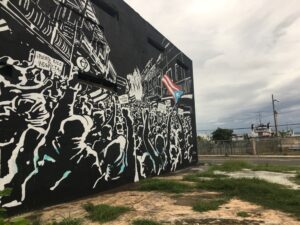 Sin Cita/Without Appointment was born out of our shared interest as a group of concerned international artists focused on ways of advocating community partnership, collaboration and the development of individual cultural expressions towards the advancement of social justice and in defense of basic human rights in Puerto Rico and beyond.

For more information about the walk, groups or organizations may email us at designamber215@gmail.com, or they may contact Ken Johnston directly at kjohnston16@yahoo.com.